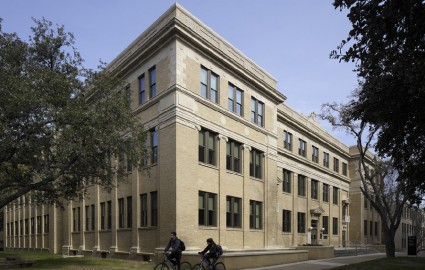 Originally constructed in 1918, the renovations and additions to Francis Hall included a new 120-seat auditorium, building information modeling facility, a videoconferencing room, several specialty labs, and exposed building systems for use as a teaching aid. These modifications were necessary in order to update the building to match modern building codes and standards, but came with many challenges. Modernizing one of the university’s oldest structures, a nearly 100-year-old building, while preserving certain areas, such at the auditorium named to honor Bob Segner, one of the schools most renowned professors of construction science, are only a few factors that made this renovation so impressive.

The three-story, 32,000 sqft building has been dubbed as a “historic building,” which created a need to preserve many aspects of Francis Halls’ original structure. Demolition of the interior, on and off site, was carefully executed in order to maintain its historical identity. Hazardous materials were removed and contemporary facets, both refinishes and embellishments, were built in order to enhance the building’s original design.

S&P also constructed new interior partitions and finishes, mechanical/electrical/plumbing upgrades, fire alarm and communication systems, roofing, and interior finish-out. The project was completed in 2015, with the students able to attend classes in the newly restructured building that spring.